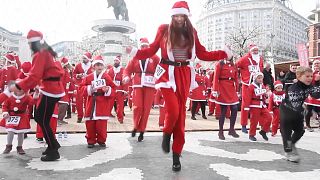 Santa Race in North Macedonia and in Russia

Runners of all ages donned festive red and white costumes to join in Sunday's annual Santa Claus race in Skopje.

Hundreds participated as the run returned to North Macedonia's capital after being cancelled in 2020 due to coronavirus restrictions.

The Santas ran 1,350 metres (0,84 miles) through central Skopje, enjoying the chance to compete against others.

The route began at Macedonia Square and took the runners over Freedom Bridge and Stone Bridge, before finishing back at the square.

In St Petersburg, hundreds of people wearing Father Frost costumes took part in a race in front of the Hermitage Museum on Sunday.

Participants were allowed to run, walk or dance over a distance of two-and-a-half or five kilometres (1,5 or 3,1 miles).

Because of pandemic restrictions, the open air event on the iconic Palace Square was the only major public event ahead of the New Year.

Russians traditionally greet Father Frost on New Year's Day, when he is said to bring presents to children.

He is often accompanied by the Snow Maiden, a character of Russian fairytales.