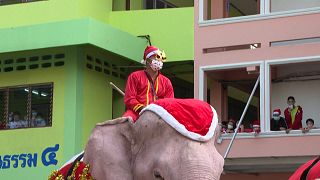 Santa Claus parades around the world

The Peruvian Santa Claus visited a deprived neighbourhood on the outskirts of Lima on Thursday to deliver sweets and gifts to children after almost two years of absence due to the COVID-19 pandemic. About a hundred children and their parents from the Mirador neighbourhood north of Lima were thrilled to see Santa Claus arrive with lots of presents. Despite having no financial support, Julio Arroyo, 44, collects donations from his colleagues, friends and neighbours to distribute them to children in the most disadvantaged neighbourhoods.

A Black Santa visited Vila Cruzeiro favela in Rio arriving by helicopter for a food distribution event. The NGO hosting the event, Unified Favelas Central (CUFA), has been working in Brazil's favelas for over 20 years and wanted to present a more socially representative Santa this year. CUFA held 200 similar events throughout Brazil on Thursday in which a Black Santa Claus greeted the children.

It is the first time many of the children living in those communities have seen a Black Santa. Five elephants sporting coronavirus masks brought a tonne of festive cheer to Thai school children outside of Bangkok on the eve before Christmas. Youngsters from the Jirasat Wittaya School in Ayutthaya, an hour's drive from the capital, sang Christmas carols and lined up to have their photos taken with the jumbos in the annual tradition.