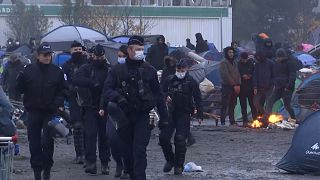 Authorities began evacuating some 1,500 migrants seeking to reach the U.K. from a muddy camp in northern France on Tuesday.

Police and CRS (special forces) officers have been overseeing the operation in the camp near Grande-Synthe.

A large number of the migrants in the camp are from Iraq and Afghanistan and are hoping to cross the English Channel, according to aid workers.

Northern France has always been a magnet for people seeking to cross to Britain via ports or its tunnel, fueled by traffickers' promises of a better life there.

The crossings are a source of friction between the U.K. and France, with British officials saying France should to more to stop boats leaving.

Those clustered in Grande Synthe are primarily Iraqi Kurds propelled via trafficking networks, according to Yann Manzi, founder of aid group Utopia 56.

Most are trying to cross in small inflatable boats, because police have made it harder to sneak onto trucks and ferries.

More than 23,000 people have reached the U.K. in small boats across the English Channel this year, including 1,185 on Thursday, a record for a single day.

In addition, thousands more were rescued at sea by French maritime authorities.