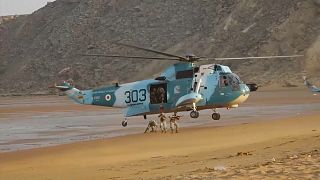 Iran's military began its annual war games in a coastal area of the Gulf of Oman, state TV reported Sunday, less than a month before upcoming nuclear talks with the West.

The report said navy and air force units as well as ground forces were participating in a more than 1 million square-kilometer (386,100 square-mile) area east of the strategic Strait of Hormuz.

Nearly 20% of all oil shipping passes through the strait to the Gulf of Oman and Indian Ocean.

The drill comes amid heightened tensions between Iran and the U.S. in the wake of former President Donald Trump's unilateral withdrawal of America from Iran's 2015 nuclear deal with world powers.

It wasn't immediately clear how long the exercise would last.