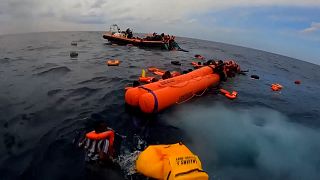 A vessel of the humanitarian group Sea-Watch has rescued dozens of migrants in the central Mediterranean after their attempt to reach Europe ended in disaster.

The German-based non-government organisation said the Sea-Watch 3 took on board a total of 412 people between Sunday and Monday.

The NGO said that the 412 were saved during seven different rescue operations.

During one of the rescues, a rubber boat began to deflate as migrants were being transferred to the rescuers' boat.

Many ended up in the water but the NGO said all were taken safely aboard the Sea-Watch 3.

Migrants reacted with screams of joy as they approached the vessel.

Three migrants were also evacuated for medical reasons and taken by an Italian Coast Guard vessel to the Italian island of Lampedusa, the NGO said.