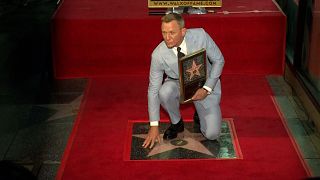 Daniel Craig unveils his star on the Hollywood Walk of Fame

Just two days before the release of his latest James Bond movie, No Time to Die, star Daniel Craig had the honor of receiving his star on the Hollywood Walk of Fame.

His star was unveiled at a rare evening ceremony and was presented by Bond producers Michael G. Wilson and Barbara Broccoli, as well as by Rami Malek, his co-star in the latest film.

The 53-year-old actor became the 2,704th celebrity to have his name placed on 7007 Hollywood Boulevard in Los Angeles.