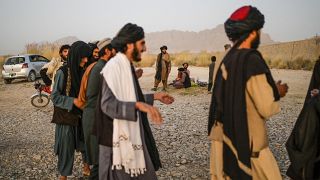 Afghans held a protest in Kabul, asking for the release of central bank assets held in the US. The US froze 7 billion US dollars in Afghan foreign reserves held in New York and the World Bank, and the International Monetary Fund and European Union have suspended financing for projects in Afghanistan since the Taliban overran Kabul on August 15 and seized control of the country.

Foreign aid to Afghanistan previously ran at 8.5 billion US dollars a year - nearly half of the country's gross domestic product.

Without access to its own or foreign funds, the interim government in Kabul can't even pay the import taxes needed to bring containers of food from Pakistan, the country's Chamber of Commerce and Industry officials said.

As the sun sets, seven young Taliban turn in a circle on the bank of the Arghandab river, singing and dancing in traditional Afghan style.

The scene would have been unimaginable 20 years ago, when the hardline Islamist group were first in power and banned music outright.

But these younger Taliban do listen to music -- even if most of it is religious -- and have come here to relax before they head back to Kandahar, the group's spiritual birthplace, just 10 kilometres (six miles) away.