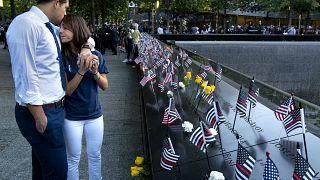 President Joe Biden, former presidents Barack Obama and Bill Clinton joined a crowd of victims' relatives and first responders at the Sept. 11 memorial plaza in New York. The memorial stands where the the World Trade Center's twin towers were rammed and felled by hijacked planes.

Observances are also planned at the the two other sites where the 9/11 conspirators crashed the jets: the Pentagon and a field near Shanksville, Pennsylvania.

Biden is scheduled to pay respects at all three places.

The anniversary comes under the pall of a pandemic and in the shadow of the U.S. withdrawal from Afghanistan, now ruled by the same militants who gave safe haven to the 9/11 plotters.

The attacks killed nearly 3,000 people and marked the start of a new era of fear, war, politics, patriotism and tragedy.