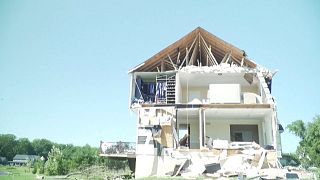 A community comes together after tornado from Ida’s remnants

Residents in Mullica Hill, New Jersey come together to help after a tornado from Hurricane Ida’s remnants touched down. At least 23 deaths have been registered across the state, according to the governor, Phil Murphy.

Flash flooding caused by the remnants of Hurricane Ida killed at least 41 people in the New York area overnight into Thursday, including several who perished in their basements during the "historic" weather event that officials blamed on climate change.

Record rainfall, which prompted an unprecedented flash flood emergency warning for New York City, turned streets into rivers and shut down subway services as water cascaded down platforms onto tracks.