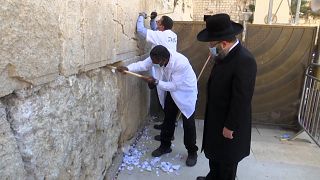 Prayer notes were removed Wednesday ahead of the Jewish New Year from between the stones of the Western Wall in Jerusalem, the holiest site where Jews can pray.

The handwritten notes, which contain prayers and personal wishes, were cleared from cracks in the Western Wall during an operation which is carried out twice a year; before Rosh Hashanah and Passover in the spring.

They are later transferred to the Mount of Olives to be buried.

Jews revere the Western Wall as a remnant of their biblical Temple, and many people place requests between the ancient stones of the wall.