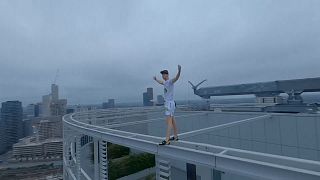 Solo free climber George King-Thompson has scaled another London tower a few months after being imprisoned for reaching the top of London's iconic Shard.

His feat came days after doing the neighbouring Stratosphere Tower.

But he admitted it was fraught with danger."I can train all I like but there's always that little bit of a percentage of a chance that I could die," he said.

King-Thompson said he wants to highlight awareness of climate change through his climbs.