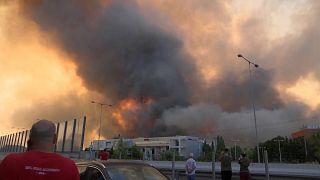 The Greek national road, which runs from Athens to Lamia has been closed due to the blaze.

The fire is thought to have started in the nearby heavily forested area of Kryoneri, but has spread significantly throughout the afternoon.

Evacuation of Varibobi was ordered short after 4:30 p.m.

As the blaze is near some power substation there are reports of problems in the power surge and thus on the hottest day in the Greek capital where over 42 degrees Celsius are being recorded.