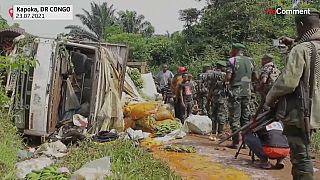 At least 16 people were killed and eight injured in an attack by suspected Allied Democratic Forces rebels in the east of the Democratic Republic of Congo.

Others remain missing after the ambush that took place on Thursday on a road between the towns of Chanichani and Mayi-Moya in North Kivu province, the military said.

The civilians were travelling in a truck that was in a convoy with a military escort. When the convoy was attacked their truck, heavily laden with goods, overturned.