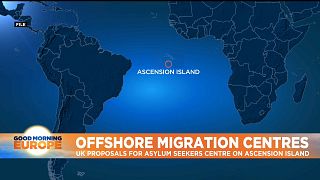 UK Ministers are expected to reveal proposals of a new law that could start to pave the way for the creation of offshore centres for asylum seekers on the British overseas territory of Ascension Island.

Right in the middle of the Atlantic Ocean, Ascension is nearly 7,000 kilometres away from the British Isles. The British Home Secretary Priti Patel has said there would be criminal charges for migrants "knowingly" arriving in the UK without permission.

She also said it was part of her mission to crack down on “vile criminals” running smuggling operations across the English channel. If these laws are passed, people-smuggling could attract tougher sentencing up to life imprisonment.

Dubbed 'The Nationality and Borders' bill, it has been described by the Home Office as containing “the most radical changes to the broken asylum system in decades” making it harder for those who enter illegally to stay in the UK.

But critics say the new legislation could see thousands of refugees turned away from Britain with vulnerable migrants criminalised for seeking a better life.