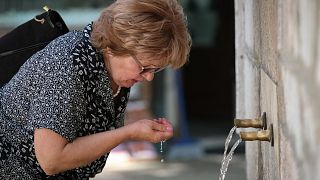 Scorching temperatures across the Balkans caused significant disruptions, as people tired of COVID restrictions finally got a chance to get out of lockdowns and enjoy the summer weather.

Bosnian health officials have turned from COVID warnings to heat warnings as high temperatures will continue throughout this week.

Bosnian Meteo Office issued an orange warning, forcing many businesses to take precautions and organise work shifts outside of peak heat hours, between 1100 and 1700CET.

The Balkan Peninsula is no stranger to summer heatwaves, but it usually happens in August, and not as early as June.

People in Pristina in Kosovo have been looking for a shade and water fountains to cool off from heat reaching 39 Celsius on Wednesday.

Security warning for travellers was issued, urging to avoid any unnecessary travel in the heat peak hours of the day.

In Serbia, there were reports of increased number of interventions on people who collapsed in the street due to heat.

The Serbian Meteo Office forcasts the temperature will rise further, to reach 40 degrees in the coming days.

Warnings were also issued for forest fires, which is a common problem over the summer months all over the Balkans.