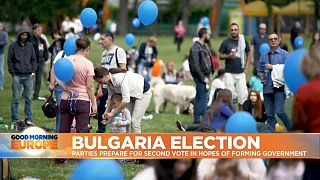 It's a month until Bulgaria's snap election, and political parties are vying for attention. Among them are a new coalition of pro-reform liberal parties called Democratic Bulgaria, which kicked off its election campaign with rock and pop performances in one of Sofia's large parks.

A push against corruption is high on their agenda.

That's after an inconclusive election in April that left a fragmented parliament. Three-time Prime Minister Boyko Borissov's GERB party scored best, but public anger over graft and poverty decreased their share of votes to 26%.

At the time, GERB and the second and third largest parties all failed to form coalition governments.

In May, Bulgaria moved to quell a political crisis by appointing retired general Stefan Yanev as interim prime minister until the July 11 election.

Yanev's been leading a caretaker government, whose main task is restoring stability after monthlong anti-government protests and political bickering. His cabinet have also been dealing with the COVID-19 pandemic while trying to organize a fair election for the country.

Democratic Bulgaria received 10% of the vote in a poll in April but are looking to become a major player in a new Bulgarian Parliament. If they become the third biggest party they could potentially be kingmaker in future coalitions.

But that's an uphill battle in a system where there is a strong division between older parties and newer, anti-establishment ones.