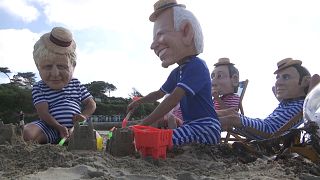 Activists from charity group Oxfam on Saturday called on the Group of Seven industrialised nations to step up their actions to fight climate change during a protest in the UK county of Cornwall.

Protesters wore masks of the seven leaders who are attending the G7 summit in England and staged a demonstration on the beach in Falmouth.

The protesters also brought a message in a bottle to launch an SOS call for climate, as they sat sunbathing and building sandcastles on the beach.

Climate change is among the top issues on the agenda of the summit, but activists say G-7 leaders have been talking for years now while more action is needed to cut carbon emissions.