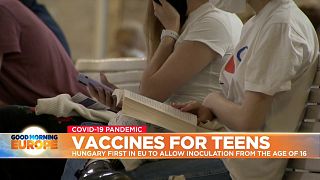 Prime Minister Viktor Orban announced at the end of April that those between 16 to 18 years of age would be able to receive the Pfizer jab. More than 90,000 young people have already registered, with parental permission needed.

Tamás Seffer is a 17-year-old who has decided to ask for the vaccine to protect his family as he believes this could be the way back to a ‘normal' life:

"I was looking forward to getting the vaccine. When it was first announced that my age group could be vaccinated, I hesitated ... but a few weeks before they officially started vaccines, I knew that yes, I would get it."

'For the sake of my family and friends'

Bence Csizmazia doesn't want to bring the virus home either, which is why he has decided to get the vaccine. Many of his family members are still queuing up for their jabs, "I cycle competitively and for the sake of my family and friends and for my own sake I didn't want to catch it."

The virus is not indifferent to young people, according to virologist Miklós Rusvai. COVID symptoms often appear months after the infection has passed, which is why Rusvai says it is important that younger people receive the vaccine.

"Six to eleven-year-olds are already being vaccinated in pilot groups. I believe that by the autumn when the next school year starts, all school-age children will be able to go to school vaccinated."

There are six vaccines available in Hungary. Besides the Pfizer/BioNTech, which is the only one approved for teenagers, the jabs made by Moderna, AstraZeneca and Johnson & Johnson are also available, as well as China's Sinopharm and Russia's Sputnik V.

So far almost 4.5 million people out of Hungary's 9.7 million inhabitants have received their first dose. According to government plans, by mid-June all Hungarians willing to get a Western-developed jab can be vaccinated.

The future of the virus

"You have families booking to travel and mum and dad are vaccinated. But your 18-year-old, 16-year-old and 14-year-old aren't. And yet they can all get infected and transmit. That's a very confusing future for us," Dr. Daniel Altmann, Professor of Immunology at Imperial College London told Euronews.

"As we move through the phases of this pandemic, one of things we are all trying to crystal ball gaze about is what our relationship with the virus looks like over the next one, five or ten years. We have difficult choices about whether we are going to percolate it forever at a low level or if we are really going to beat it down. The only way we are really going to beat it down is if we don't have large sectors of our population transmitting the virus between ourselves in schools and colleges."