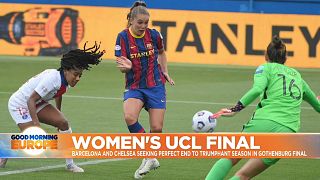 Chelsea and Barcelona head to Gothenburg for UEFA women's final

Mental toughness and a perfect track record will be on display at the Champions League final between Chelsea and Barcelona in Gothenburg on Sunday.

The Barcelona women's team have won all 26 of their league fixtures this season on their way to reaching to final.

The Catalans thumped Manchester City in the quarter-finals and knocked out Paris after the French had ended Lyon’s five-year reign as champions.

Lieke Martens scored two goals in the semis as Barcelona reached their second Champions League final. Despite losing out in 2019, the Dutch striker thinks this will help them on Sunday.

"I think it’s a really good experience for the team that we made it already once to the final. I think we have been really good the last couple of years and having tough opponents, all those games will help you to play in that game on Sunday," Barcelona forward Lieke Martens said, "I'll take advantage of everything we have and we will see how it will end, but the feeling in the team is really good."

Chelsea has become the first club to have both the women's and men's teams reach the final of the Champions League, with coach Emma Hayes’ side first up for a shot at European glory.

“They’re amazing! All of them, they really are and not just the commitments they made to the team this whole season on the pitch," Head coach Emma Hayes said of her teammates, "I will encourage them to play with the confidence, conviction, and bravery that’s required in those moments to do what they’ve always done. Play the game they love, lucky them!’’

The match will be played behind closed doors, due to current pandemic restrictions implemented by local authorities in Sweden.

This will be the first final without either a German or French team since 2007 when Arsenal – also with current Chelsea manager Emma Hayes on their coaching staff – defeated Swedish side Umea.

A wildfire rages in the Serra da Estrela natural park, a mountainous region in central Portugal designated by Unesco.