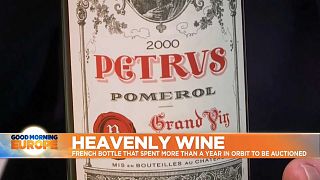 It's one of just 12 bottles that were sent into space in November 2019 by researchers looking at making plants on Earth more resilient to climate change. It returned to Earth 14 months later with a slightly altered taste, according to wine experts who have sampled it.

Tim Triptree MW is the International Director at Christie's Wines & Spirits. He told Euronews that he has not tasted the so-called space wine, but the version aged on Earth is excellent:

"Petrus 2000 is a fantastic wine, so I haven't actually tasted the one that's been into the space station. But I've tasted a terrestrial version and it is absolutely outstanding wine. Hence it was chosen for this scientific research. Petro's is one of the most luxurious wines," Triptree also said this Bourdeaux ages really well:

"So this is, you know, over 20 years old. But Petrus has an amazing ability to age and evolve in the bottle. It develops tertiary characters with bottle age. So leather, cedar, cigar box. So it's got multilayered complexity. It's ideal for scientific research to see how it matures up in space."

The proceeds are expected to go towards scientific research. And the lucky buyers will get not one, but 2 bottles: not only a bottle of Petrus that's been aged for 14 months on the International Space Station, but they are also going to get a 'terrestrial' bottle.

"So it'll be a fascinating comparison to taste the two different wines side by side," Triptree went on, adding that this is an unprecedented sale:

"It's the first time a bottle of wine has been into space and it does come in a beautiful, crafted trunk, which includes decanters. It's got glasses. It's even got a corkscrew made of meteorite!"