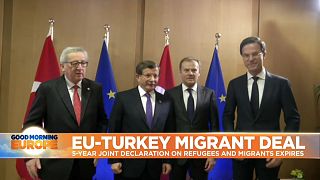 EU must renew migrant deal with Turkey 'as soon as possible'

At the height of the migration crisis in 2016, the European Union agreed to give Turkey money in exchange for a reduction in illegal crossings and an improvement in the situation of refugees and migrants in Turkey itself.

But the 5-year term has now expired - and Josep Borrell - the EU's foreign affairs chief - said Brussels should renew its immigration agreement with Ankara. Borrell stressed that the refugees are still in Turkey and “continue to need our support”.

Gerald Knaus, Founding Chairman of European Stability Initiative and also one of the architects of the EU-Turkey 2016 migration deal thinks it's crucial for the agreement with Turkey to be renewed urgently:

“This money has had a major impact. Today 80% of young Syrians in Turkey say they want to stay, 700,000 Syrian children go to school in Turkey and irregular crossings have dropped. So that has worked."

But Knaus says things are unlikely to improve unless the EU makes a new deal.

"Unfortunately one year ago, after four years of choosing projects, the European Union has not put a new offer on the table for the next five years. Turkey declared they would not take people back, and for the last year the way the EU has stopped arrivals has been through push-backs, which is against EU law and against the international refugee convention. And that needs to change as soon as possible. The only way to do it is to renew an agreement with Turkey based on international law."

Bars and restaurants are still open in downtown, using candles and phone lights to see.

Russian army stays on the defensive likely because of munition shortage