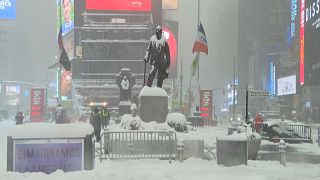 This is New York City after a winter storm hit the eastern United States.

With flakes falling since Sunday evening, the Big Apple and northern New Jersey were braced for as much as 55 centimetres of snow, and parts of New England for 30.5 cm or more.

The New York City area had scattered power outages by early Monday evening, affecting about 3,200 homes and businesses in the city and its New York suburbs, 4,000 in New Jersey and 1,200 in Connecticut.

Hundreds of flights and many trains and were cancelled, and aboveground New York City subway service stopped at 2 pm

In recent days, a storm system blanketed parts of the Midwest, with some areas getting the most snow in several years. Ohio and Washington DC, also got snow.

The snow and cold in Washington led President Joe Biden to postpone a visit to the State Department that had been planned for Monday.