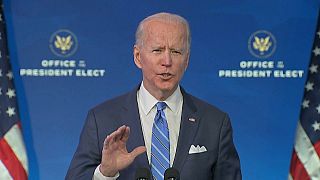 Joe Biden's ascent to the pinnacle of US politics could not contrast more starkly with that of his predecessor Donald Trump; a sure and steady rise through the ranks of the party establishment. From modest beginnings in Scranton, Pennsylvania.

Biden graduated from law school and briefly worked as an attorney before turning to politics. He became one of the country's youngest-ever senators in a surprise victory in 1972, the start of a distinguished four-decade career on Capitol Hill.

But it was one that was almost derailed by tragedy when his first wife Neilia and baby daughter Naomi were killed in car accident just weeks after his inaugural senate election. He famously took the oath of office for his first Senate term from the hospital room of his toddler sons Beau and Hunter, who both survived the accident.

There was further bereavement years later when his son Beau died of a brain tumour in 2015.

After a failed presidential bid in 1987, Biden ran again 20 years later but found himself eclipsed by a uniquely charismatic opponent. Barrack Obama, however, valued his elder colleague's experience and chose him as his second in command.

Undeterred, the arch-centrist entered the fray again, finding himself up against an array of progressives for the 2020 Democratic nomination. After a faltering start he swept to victory against Bernie Sanders, his main leftist rival.

With his party still divided, Biden began his campaign in earnest, and he was soon having to fend of allegations of corruption from the Trump camp over his son Hunter's business dealings in Ukraine.

President Trump's team also sought to portray the Democrat candidate as mentally declining, a hostage to the left and inherently weak. He was mercilessly mocked by Trump for giving campaign speeches from the basement of his home in Delaware.

But Biden emerged from his bunker in fighting form, in a now infamously rancourous TV debate in which he gave as good as he got.

As the nation emerges from the closing carnage of the Trump presidency, perhaps Biden's greatest challenge is uniting a country in which so many reject his leadership.