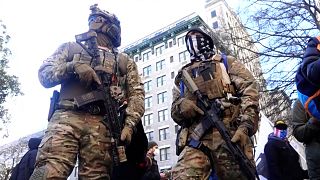 Rival heavily armed groups were gathering near government buildings in Richmond, Virginia, ahead of planned protests against Wednesday's inauguration of President-elect Joe Biden in Washington.

This may have set off security warnings in the capital due to Richmond being fairly close to Washington, but it may not be accurate to conflate the two events.

Monday was Lobby Day in the US. Every year gun lobbyists march on Richmond, Virginia to protest anti-gun legislation and defend their right to bear arms.

Several different armed groups were present, many with different and sometimes conflicting ideologies including those who were pro-Donald Trump and those who were anti-government, with some groups identifying as rivals to others.

Also present were members of the Black Panthers movement, some of whom were also armed.

Authorities in cities across America have been preparing for protests following the storming of the Capitol building in Washington on January 6, with government buildings boarded up and a heavy police presence.