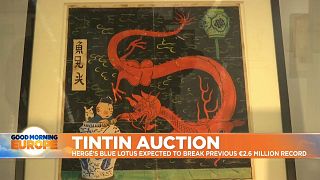 With his trademark quiff and ever-loyal dog Snowy, Tintin has been entertaining audiences since 1929.

An intrepid reporter, his exploits have taken him around the world, solving mysteries, spreading good humor, and exuding an aurora of honesty and decency.

One of his lesser-known adventures takes him to China for an encounter with the Blue Lotus. The original artwork for this outing has just been auctioned in Paris.

Dating back to 1936, it shows a petrified Tintin coming face to face with a red dragon as he investigates the shady dealings of an oriental spy network.

"This gouache was rejected by the publisher Casterman because of reproduction costs. Casterman thought that the comic albums were already expensive and reproducing this cover would increase more the costs of production," says Eric Leroy, a comics expert, "so Hergé will redo his drawing in a more simple way. Keeping the mystery but with a smaller color scale."

It's one of only five such examples of Herge's work, and there are outstanding questions about how it came to be. But there are no issues over its authenticity or value.

"We have set the previous record for the 'Pages de Garde' in 2014 at €2.6 million, which is an important amount. It would be fair for this piece to break this record," Leroy said.

"Hergé had done only five comic covers using this technique of direct color, so it's very rare color for him The format 34 by 34 is also important as it's bigger than other covers. So it's an exceptional piece deserving an exceptional price."

Nearly a century after his first exploits, Tintin remains popular among comic book readers and collectors alike. A paragon of virtue, with just a hint of mischief.

And now, after this sale, a multi-million euro price tag.