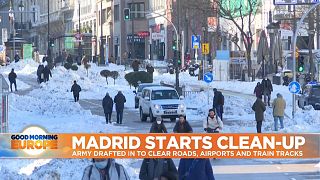 Army drafted in to clear roads, airports and train tracks in Madrid

Following the worst winter storm in decades, authorities in the Spanish capital have suspended classes across the region until 18th January. The heavy snowfall has caused structural damage and broken heating pipes.

Storm Filomena paralyzed the city of Madrid over the weekend, forcing the closure of Barajas Airport, suspending train services, and leaving as many as 1,500 people trapped in their cars

Ernesto Mantilla is a street cleaner dealing with the storm's aftermath:

"The ice is very hard and that is the principal problem that we have. Also, these very low temperatures mean that it isn't thawing and the ice isn't softening up. So here we are, all morning. "

A unit from the Spanish army has been helping to clear snow from the entrances of Madrid's regional hospitals. Lieutenant Robles said other hospitals will also see the army clearing out the ice:

"At the moment we are clearing the main entrance to the regional Madrid hospital Severo Ochoa. We have been given this mission for this and for other hospitals."

The heavy snow led to fears that deliveries of the much needed COVID vaccine would be affected. However, most major motorways around the central region are now open well as the country's main international airport.