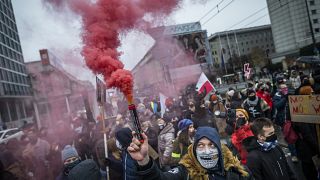 Thousands protest in Warsaw against abortion reform and PiS government

Minor scuffles between police and protesters took place near the monument to the Smolensk air disaster in 2010 which killed the country's then-president and scores of other senior Polish officials.

Protesters also gathered at a central intersection and began marching to the home of Jarosław Kaczyński, the head of the ruling Law and Justice (PiS) party.

Kaczyński, who is a deputy prime minister, is regarded as the strongman of the ruling conservative government and as the figure responsible for the court's decision.

Riot police blocked the protesters, forcing them to take another route along the Vistula River to reach Kaczyński's home.

A small group of protesters dressed as Citizens' Militia officers from the time of communist Poland were able to reach Kaczyński's house.

Police intervened and moved them on.

This protest was scheduled to coincide with the 39th anniversary of martial law imposed by Polish communist party leaders in 1989.

Massive protests began in Poland on October 22 when the Constitutional Tribunal, reformed by the ruling ultra-Catholic PiS outlawed the voluntary termination of pregnancy in cases of severe foetal malformation, ruling that it is "incompatible" with the Constitution.

The ruling resulted in the prohibition of all abortions except in cases of rape and incest or when the mother's life is in danger.