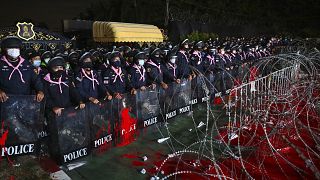 Protesters gathered in Bangkok on Sunday, in another of a long series of pro-democracy demonstrations calling for reforms of both the government and the monarchy.

The demonstration rallied on a street in the city with a plan to march to the base of the 11th Infantry Regiment, a palace security unit under direct command of the Thai monarchy.

About a thousand protesters then began marching towards the base, carrying yellow inflatable ducks, which are seen as a symbol of the demonstrations.

The protest movement's core demands are for Prime Minister Prayuth Chan-ocha and his government to step down, the constitution to be amended to be more democratic, and the monarchy reformed to make it more accountable.