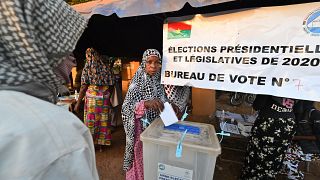 Burkina Faso vote in a general election in the shadow of a growing jihadist insurgency, and with opposition candidates warning of a "massive fraud" at the polls.

President Roch Marc Christian Kabore is expected to win re-election, with his supporters talking up his chances of an outright victory in the first round of voting.

But no votes in the presidential and parliamentary polls will be cast in one-fifth of the country, where large swathes remain outside the state's control and jihadist attacks strike almost daily.

The violence has forced one million people -- five per cent of the 20 million population -- from their homes in the last two years and at least 1,200 have been killed since 2015.

Most of the 12 opposition candidates running against Kabore have criticised the incumbent's failure to stem the bloodshed.