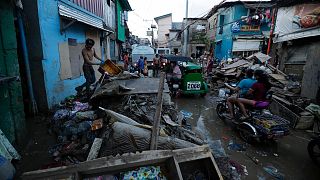 Typhoon leaves at least 42 dead and 20 missing in Philippines

At least 42 people were killed and some 20 are missing after a typhoon passed north of the Philippine capital.

Many villages near Manila were covered in mud and debris after the typhoon caused major flooding.

Typhoon Vamco passed north of Manila between the provinces of Bulacan and Pampanga during the night of Wednesday and early Thursday, knocking down power lines and damaging homes.

Tens of thousands of people have been rescued, although the waters have mostly receded but the army was still rescuing people in flooded communities.