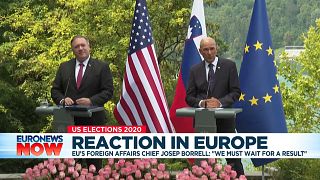 European leaders have remained largely silent as the US continue to count its votes. Slovenian Prime MinisterJanez Jansa was the only one to congratulate Donald Trump yesterday in a controversial tweet.

But Josep Borrell the EU's Foreign Affairs chief, was quick to point out that 'We must wait for a result'. Euronews Brussels correspondent Meabh McMahon says it's been 'radio silence' in the EU so far.

Watch Euronews Now's full report in the player above.