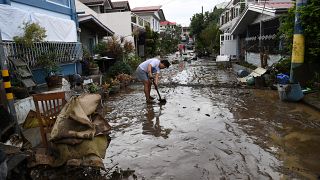 Residents began cleaning up after Typhoon Goni lashed the Philippines over the weekend.

At least 16 people were killed and about 13,000 shanties and houses were damaged or swept away in the east of the country.

Goni blasted into Catanduanes province at dawn on Sunday as a super typhoon with sustained winds of 225 kilometres (140 miles) per hour and gusts of 280 kph (174 mph).

But the storm weakened considerably after making landfall and shifted direction to spare the capital, Manila, before blowing out into the South China Sea.

The Office of Civil Defence said at least 16 people were killed in Catanduanes and nearby Albay province, where three others remain missing.

Catanduanes, an island province of more than 260,000 people that is often lashed by Pacific storms, was isolated after losing power and communications due to Goni and another typhoon that had hit a week earlier.