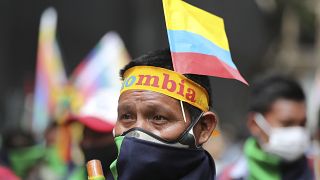 Colombia's indigenous people, teachers, students and unions take to the streets of Bogota as part of a national strike to demand government action and protest against violence inflicted on indigenous people.

Indigenous people have been demanding a face-to-face meeting with Colombian President Ivan Duque since October 10 but since it never occurred, they marched on Bogota, arriving on Sunday.

They are angry at the lack of security in many areas where they live that have been overrun by violent armed groups fighting over the lucrative drug trade.

Colombia is the world's largest producer of cocaine, much of it destined for the United States.

Despite the 2016 peace deal, security has not improved and according to the independent Indepaz watchdog, there have been 68 massacres in indigenous areas in 2020.

Right-wing Duque came to power in 2018 after running a campaign in which he vowed to modify the peace agreement made by his predecessor Juan Manuel Santos, which he considered too lenient on former rebels accused of atrocities.