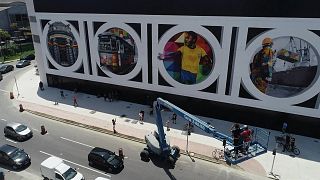 Brazilian graffiti artist Eduardo 'Kobra" paid homage to football legend Pele with a mural in the coastal city of Santos, ahead of the sporting legend's 80th birthday.

After two months of research and 45 days painting, Kobra finished the 800 metre square painting on Sunday.

The mural is part of Santos' revitalisation project and represents the city's symbols, including the coffee, stock market, the port, a tram, and the biggest icon, Pele.

The former striker will turn 80 on 23 October.