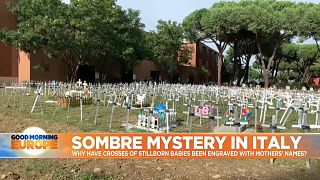 An investigation in Italy is trying to establish why the names of the mothers who had their foetuses aborted in the second trimester were engraved on the crosses of graves without their consent.

The mothers claim they were not aware that their names would be written on the graves when they declared they didn’t want to be in charge of the burial of their foetus.

Most of the graves date from between 2017 and 2020, but some say the practice dates further back.

A group of women's rights organisations have launched a legal process after collecting a hundred stories after women said they were not asked for their consent.

"All these women told us that they felt very disrespected. They told us they felt their freedoms and rights had been violated, in particular, their freedom of choice and thought but also their religious freedom," Elisa Ercoli, president of women's rights organisation Differenza Donna.

Those who work in the abortion department of hospitals said that women sign a form about the burial but ultimately a waste collection company handles burials when the women do not want to.

Italy's data protection agency is also looking into the mystery behind the record of the women's names on the graves.

Dozens of people have held a candlelight vigil in Jakarta on Sunday following the deaths of at least 125 people at a soccer match.