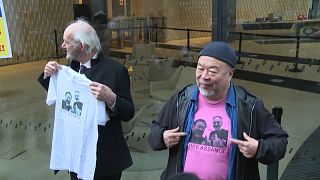 It happened outside the Assange's trial at the Old Bailey in London.

Assange is fighting an attempt by American prosecutors to extradite him to the US to stand trial on spying charges.

US prosecutors have indicted the 49-year-old Australian on 18 espionage and computer misuse charges over WikiLeaks' publication of secret US military documents a decade ago. The charges carry a maximum sentence of 175 years in prison.

Assange's lawyers say the prosecution is a politically motivated abuse of power that will stifle media freedom and put journalists at risk around the world.

Speaking outside the courthouse, Weiwei claimed that the treatment of Assange bore similarities to the way Chinese authorities suppress dissidents.

Assange's lawyers argue that he is a journalist entitled to First Amendment protection and say the leaked documents exposed US military wrongdoing.

The case is due to run until early October. The judge is expected to take weeks or even months to consider her verdict, with the losing side likely to appeal.