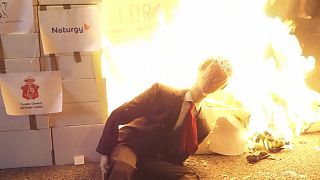 Independence supporters in Catalonia set fire to an effigy of King Felipe VI on its National Day as tensions over secession from Spain continued to simmer in the region.

Separatists have gathered on September 11 by the hundreds of thousands and packed downtown Barcelona for several years, but this year the Catalan government's health authorities banned gatherings of more than 10 people with the virus on the rebound in Spain.

The movement's leaders are now involved in political in-fighting as well as struggling to handle the health crisis caused by the virus.

"We aren't happy with the way pro-independence political parties are behaving. They have fallen for this strategy from the central government with round table discussions that won't lead nowhere," said Adria Alsina, the National Secretary for the separatist Catalan National Assembly (ANC).

For years, polls have shown Catalonia's 7.5 million residents roughly evenly divided on the question of independence from Spain.

Still, demonstrators at the annual celebration for La Diada, Catalonia's National Day, on Friday expressed their optimism about a future Catalonian state.

"I think if we're all together, things will go much better for us. But I always say our goal is independence. And then we will decide which colour we will paint it. I hope someday politicians understand that. So we can all pull in the same direction," said Jordi Mercader.

Friday's demonstration comes as Catalonia's regional president and fervent separatist Quim Torra faces possible removal from office after disobeying a court request to take down what was considered a politically charged banner, in violation of election law.

Torra could call a regional election before being removed, but separatists aligned with his Together for Catalonia alliance are also pushing for him to hold onto his post in defiance of the court.

In either case, the four major parties composing the pro-secession bloc in the regional parliament are preparing for an election at some point in the coming months.