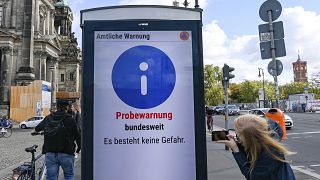 Germany has conducted its first nationwide emergency warning test since reunification in 1991.

At 11.00 CEST on Thursday, local governments set off the alarm on digital advertising boards, and even via sirens and loudspeaker trucks.

TV and radio programmes were interrupted by a government announcement, and the mobile phone app NINA sent a push notification for users.

Sirens were not used in the capital city, Berlin, where civil emergency sirens were abandoned in the 1990s.

The all-clear was given after 20 minutes.

According to the Office for Protection and Disaster Aid (BBK), the alarm is intended to test out Germany's warning systems and prepare the public for what to do in the event of a national emergency, such as natural disasters or nuclear accidents.

"In crisis situations, people mainly fall back on what they know and what they have already learned - and it is precisely this knowledge that we want to develop".

However, the BBK has noted concerns that the nationwide notification to mobile users was delivered late.

A statement confirmed that this was due to "an unexpected simultaneous triggering of a large number of warning messages via MoWaS".

According to the Conference of Interior Ministers, Germany plans on making the tests an annual event on the second Thursday of September.