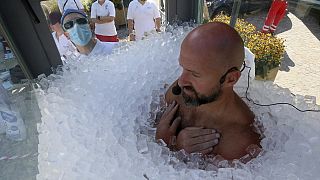 An Austrian extreme athlete on Saturday broke his own world record by spending more than two-and-a-half hours submerged in ice.

The crowd in the Austrian town of Melk watched on as Koeberl surpassed his own record, set last year, by over 20 minutes.

Over 200 kilograms of ice was needed to fill up the cabinet.

Before the attempt, Koeberl described how he draws on "positive emotions" to fight through the pain.

Afterwards he was simply pleased to feel the sun on his back, before eating an ice cream while posing for the media.