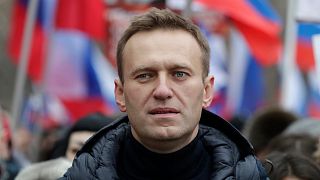 Navalny is 'a catalyst for Russians' own discontent' says analyst

On Thursday morning, Russian opposition politician Alexei Navalny was on a flight from Siberia to Moscow when he suddenly fell ill. After an emergency landing, Navalny is now in a coma in a Siberian hospital hooked on a ventilator. All this, his supporters say, is likely the result of an attempt to poison him.

This isn't the first time he's allegedly been poisoned. On July 28, 2019, Navalny was rushed to hospital from prison where he was serving a sentence with what appeared to have been another poison attack.

But what would make Navalny such an enticing target? Euronews asked Mark Galeotti, director of the consultancy Mayak Intelligence and Russia analyst.

According to Galeotti, Navalny has become "a catalyst for Russians' own discontent." No matter who you are in Russia, every Russian will have had experiences with corruption - an issue Navalny has set out to eradicate for almost 20 years. It is an "Achilles heel of the Kremlin," Galeotti notes, which makes him very dangerous.

On his Youtube channel, Navalny has been featuring "very well researched exposes of corruption," Galeotti points out. "That means that he is in some ways the most recognisable non-government, non-official opposition figure in the country at large."

According to Galeotti, Navalny has so far managed to walk that fine line between allowed protest and opposition and going too far. However, considering the anti-government protests in Belarus and other protests in the Russian far-East, in Khabarovsk, "maybe in some ways, the line moved and he didn't," Galeotti says.

If Navalny were to be sidelined, there is no one really to replace him, Galeotti points out. "There is a whole generation of younger Russian activists who is ready to move forward. The problem is there is no one who has the same kind of national stature."

"You have a lot of powerful local figures, but no one really who would bring them all together. Someone can emerge but at the moment there is no heir apparent."