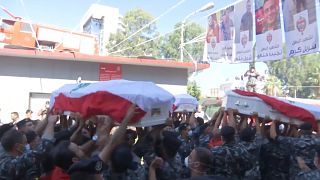 Today has held the funeral of three Lebanese firefighters who were killed in a massive explosion earlier this month that destroyed much of Beirut.

Friends, relatives and colleagues of the victims gathered in front of the Beirut Fire Brigade to bid farewell to the three dead - Charbel Hatti, Najeeb Hatti and Charbel Karam - in front of the Al-Foujj Center in the Karantina neighborhood, north of Beirut.

The three men died while trying to put out a fire that broke out before the port exploded.

Although the cause of the fire that ignited nearly 3,000 tons of ammonium nitrate stored in the port of Beirut remains unclear, many blame the blast on mismanagement and corruption by the government and the ruling elite at large.