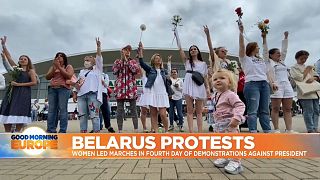 Women protesters in Belarus: 'We can change country for the better'

Belarus' capital has seen hundreds of women take to the streets in the daytime this week, in a show of solidarity with the protest movement and the thousands detained amid the violent state crackdown.

In several areas of Minsk, large groups of women -- often dressed in white -- have formed long human "chains of solidarity".

It was the latest move by women who have taken a leading role in the protests -- and, they say, the country's path towards change.

President Alexander Lukashenko's return to power after an election widely seen as rigged sparked an outcry, but the protests that resulted have been brutally repressed.

Elections in Belarus have rarely been this polarising. For the past 26 years Alexander Lukashenko has been crowned the victor in an event in which many in the country refused to take part, not believing the elections to be free or fair.

This year Lukashenko, who has repeatedly said Belarus was not ready for a female president, had his seat and his credibility challenged by three women who came to embody Belarusians' exasperation with his administration.

Maria Kolesnikova is the only one left in the country after two campaign colleagues fled Belarus over security concerns. Sviatlana Tsikhanouskaya fled the country for Lithuania after the election for her family's safety. Veronika Tsepkalo also left, on the day of the vote, for similar reasons.

Kolesnikova, campaign chief for the barred candidate Viktor Babariko and then a leading figure in Tsikhanouskaya's campaign, told Euronews she is not going anywhere as her mission is not over yet.

"We're going to continue to insist on having free and fair elections, on releasing all political prisoners, among which are our friends and loved ones, and we're going to create a platform to support those who suffered during the protests," she said.

The role the women have taken on in the opposition campaign has inspired those taking to the streets.

"I guess that this symbol of these three women showed that we have these friends. We have also a voice, we are equal, and in some cases we are even stronger I guess," said the young marcher who spoke to Euronews.

The human rights body Amnesty International says the authorities in Belarus have targeted women involved in politics in "gender-specific ways" during the campaign. Activists reported facing threats of sexual violence and of their children being taken into care.

Kolesnikova says such harassment has prompted a backlash.

"I feel a big support from Belarusian people. People meet me in the streets and hug me, and I hug them back. I know that together we can change Belarus for the better," she said.

Those protesting this week said this election proved women can speak on behalf of Belarus, and after 26 years of virtual silence they seem determined to seize the opportunity to make their voices heard.