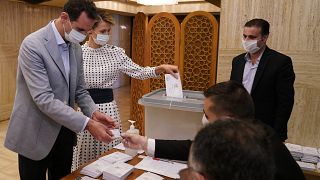 Syrians headed to polling stations in government-held parts of the war-torn country on July 19 to elect a new parliament amid strict health measures to prevent the spread of coronavirus.

Syrian President Bashar al-Assad, marking 20 years in power, and his wife, Asma, both wearing masks, voted in Damascus, at the Ministry of Presidential Affairs.

The vote is the third to take place in Syria since the conflict began in March 2011.

The conflict has killed more than 400,000 people, displaced half the country's population and sent more than five million as refugees, mostly into neighbouring countries.

The vote this year follows a new wave of U.S. sanctions that came into effect last month and a campaign to fight corruption that saw a wealthy cousin of Assad come under pressure to pay back tens of millions of dollars to the state.

Some 1,658 government-approved candidates are running this year for the 250-seat People's Assembly.

The total number of eligible voters hasn't been announced.

As in previous ballots in Syria, the vote was expected to produce a rubber-stamp body loyal to the president.

Inside polling stations, all workers were wearing masks and gloves and voters had to use their own pens in the sanitized booths.

Once they cast the ballots, voters had to leave immediately as no gatherings were allowed inside.

People also had to keep a safe distance while waiting for their turn.

Assad has twice postponed the country's parliamentary elections this year in light of restrictions in place to combat the spread of the coronavirus.

Assad himself is not standing for election.

Syria, that had a pre-war population of 22 million, has reported 496 cases of infections and 25 deaths because of COVID-19, the disease caused by the virus.