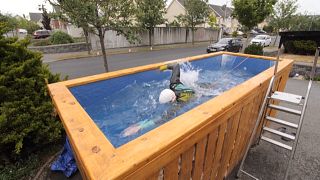 During coronavirus lockdown, the aspiring Paralympian has been unable to train as usual for the now-delayed Tokyo games.

Instead, he has been finessing his breaststroke in a homemade "treadmill pool" where he is held in place by elastic cords.

"When I'm swimming in it the resistance is actually pulling me back," the 48-year-old told AFP.

"I'm going nowhere -- I'm going as fast as I can but I'm not going anywhere," added Hynes, who has been legally blind as a result of macular degeneration since 2015.

"Over the last few months, fear has exerted a kind of gravity pulling us down, but now we find there is hope lifting us up again," he said.

But social distancing rules still weigh down Hynes' training schedule, as he bids to qualify for the Tokyo Paralympic Games, which have been pushed back to August next year.

Ireland's health authorities recommend maintaining a two-metre distance from others, forbidding Hynes from training as he usually would tied to a seeing-eye guide.

"Even if I was to go open water swimming I can't because normally if I'm tethered to a guide our tether is one metre," he said among potted plants outside his home in Tuam, County Galway.

Instead, he is tethered by twanging orange chords to the side of his personal pool, which is the size of a family car.

"I have to stick with the training and try and get faster and fitter, and improve and see if I can qualify," he said.

Hynes has already represented Ireland at an international level, racing in the 2018 Madeira Paratriathlon World Cup in Portugal.

And last year he took home a gold and bronze medal from the ITU Multisport World Championships in Pontevedra, northwest Spain.

He currently trains between 15 and 20 hours a week.

But while a running treadmill and an exercise bike allow him to train as normal, the swimming portion of the triathlon required a new contraption.

Fashioned from wooden pallets and lined with tarpaulin, it was put together by his two carpenter brothers over the course of two weeks.

"Swimming is a very technical sport so if you don't keep it up you lose a feel for the water and you actually regress -- your technique gets worse and worse," Hynes explained.

"Here I can just go in and I can do my session and whether it's rain, hail or sunshine.

"It's only two or three metres from my front door, so I've no excuses."