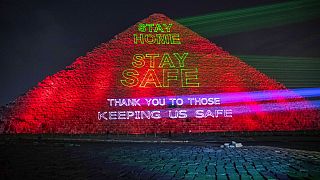 "Stay home, Stay safe, Thank you to those keeping us safe," read the message emblazoned on the Great Pyramid of Giza.

The government has also extended the closure of the country's famed museums and archaeological sites, including the Pyramids and the Sphinx at Giza, until at least April 15.

Egypt has reported more than 600 infections and 40 COVID-19 deaths.

Egyptian government announced last Tuesday a two-week night curfew starting from 7 pm until 6 am in the Arab world's most populous country.

Countries across the Middle East have imposed sweeping measures to prevent its spread, including closing their borders, cancelling flights and in some cases imposing round-the-clock curfews that confine people to their homes.