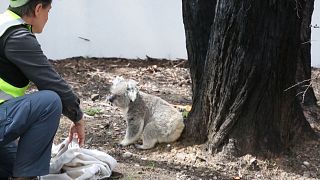 Koalas are slowly being released back into the wild following the unprecedented fires that devastated more than 2.5 million acres (1 million hectares) of the country over the summer.

Four adult koalas and one brand new joey have been released in the Kanangra-Boyd National Park in the state of New South Wales. They're the first of 12 koalas rescued from the Blue Mountains area during the bushfires, which have been sheltering at Sydney's Taronga Zoo since January. The others will be fast-tracked due to the outbreak of the coronavirus (COVID-19), which means there will be 13 in total released back to the wild.

A shocking 10,000 koalas (a third of the total koala population of NSW) are estimated to have died as a result of the bushfires, as well as drought over the summer. Koala hospitals saw an unprecedented increase in admissions during this time, with many being treated for burns and dehydration.

While four koalas don't seem like a lot in the larger scheme of things, it's a crucial and positive step toward rehabilitating the area's population — the Blue Mountains region is home to the most genetically diverse koalas in Australia, making them important for species conservation.