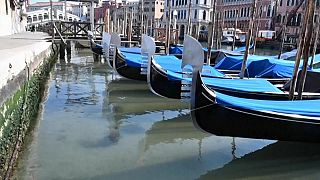 The lockdown aimed at combating the spread of COVID-19 has had an impact on pollution levels - they're dropping.

As well as noticeably clearer water in the canals of Venice, new data from the European Space Agency's Copernicus Sentinel Satellite shows a dramatic and drastic reduction in air pollution across hard-hit Italy - and beyond.

"It is really a sad indication that the economic activity goes down, but for our planet that is a relief, because the pollution levels are also decreasing.

"Our planet is beautiful, but also extremely fragile and I think many people see our planet and this pollution caused by human beings in a very different perspective now.

"So I think for the climate change discussion, this is certainly an eye-opening observation".

But the phenomenon is not only being felt in Europe; harmful industrial nitrogen dioxide levels in China have plummeted, at least partly, as a result of its coronavirus containment measures and subsequent economic slowdown.