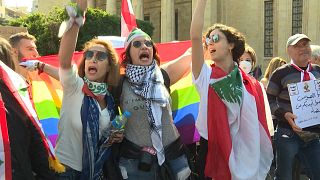 Women defy conservative regimes in rights marches across the world

Demonstrators in Bishkek, the Kyrgyz capital, were marching in support for women's and children's rights when the unidentified men pushed into the crowd and tore away their banners.

Authorities said they arrested both demonstrators and masked men, but news reports said the detainees were primarily women.

Across Asia and the world, women flooded onto the streets to support International Women's Day.

In the Indonesian capital Jakarta, protesters gathered in front of the presidential palace, calling for stronger protection of women's rights.

Women rallied in cities across the country, including Karachi, despite petitions filed in court seeking to stop them.

The opposition was stirred in part by controversy over a slogan used in last year’s march: “My Body, My Choice.”

Some conservative groups had threatened to stop this year's marches by force, but Pakistani officials pledged to protest the marchers.

The rallies are a notable event in conservative Pakistan, where women often do not feel safe in public places because of open harassment.

The main Islamic political party, Jamaat-e-Islami, organised its own rallies to counter the march.

Elsewhere in the world, women were marching, too: thousands gathered to mark International Women's Day in Beirut, Lebanon; in Afghanistan; in Mexico City; and more.

In Sao Paulo, Brazil, women marched against president Bolsonaro, who regularly belittles and even insults women.