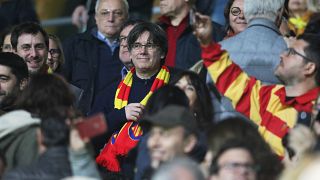 Carles Puigdemont takes in rugby game ahead of Perpignan rally

On the eve of his giant gathering in Perpignan, ex-leader of Catalonia Carles Puigdemont took in a rugby match in the French city.

Puigdemont has been in self-imposed exile since declaring Catalan independence from the rest of Spain.

He was pursued by Spanish authorities for alleged rebellion in relation to the push for Catalonia to split from Madrid.

At least 70,000 people are expected to attend the Puigdemont gathering in Perpignan on Saturday.

It is the nearest MEP Puigdemont has come to returning to Catalonia since fleeing in 2017.