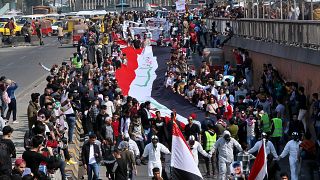 Anti-government protests continued in Iraq on Sunday, with over 1,000 students marching through the centre of Baghdad.

"Our soul and blood, be sacrificed to you Iraq" was chanted one day after at least two protesters were injured in confrontations with riot police near Khilani Square.

The protesters marched through Tahrir Square and the freedom monument in the square and continued marching through the tunnel and the streets nearby.

Demonstrators held pictures of those they said had been martyred as they marched peacefully without any violence or clashes.

At least 500 have died under fire from Iraqi security forces who have used live rounds and tear gas to disperse crowds.

Mass anti-government protests erupted on October 1, 2019 when thousands of Iraqis took to the streets in Baghdad, and the predominately Shiite provinces in southern Iraq, to decry government corruption, poor services and lack of employment.